on the relationship between movement and percept 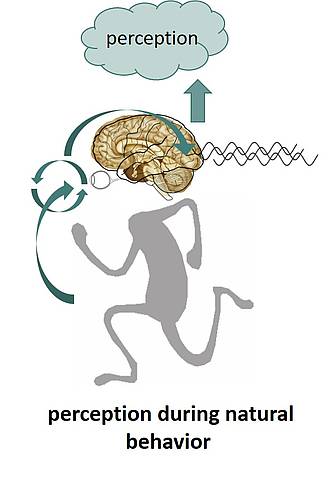 Exciting findings from animal electrophysiological research in the past years suggest that an increased rate of body movements results in an enhanced response of neurons within the visual system, despite the absence of visual changes. It is unclear why such modulation occurs in areas whose function is to process visual input leading to percept. In humans, little is known about the influence of movements on sensory brain areas mainly due to the technical challenges of measuring brain responses during pronounced muscle activity. However, behavioral studies in humans show that percept and perceptual demands are connected to the rate of movements. Hence, psychophysical and neurophysiological evidence suggests a general link between rhythmic body movements and perceptual processes.

The main aim of this research is to decode this relationship between movements and percept and identify the underlying mechanism. To achieve this, human non-invasive recordings from electro- and magnetoencephalography (EEG, MEG) as well as human and animal multi-electrode recordings collected during movement execution will be analyzed. I will focus on directly relating perceptual processes, and their underlying neuronal oscillations, to rhythmic movements.

This work is supported by the ERC starting grant “BBRhythms” (677819)